Cute is not normally a word people associate with sharks but cute is exactly what these little guys are. Epaulette sharks belong to the bamboo or long tail carpet shark family. The sharks are quite small in comparison to some of their more well known cousins with the largest species reaching just over a meter in length. Their small size in conjunction with their placid non aggressive nature means these sharks are harmless to humans. However if they are harassed or picked up they may bite, though even this bit will not cause much damage as they have quite small mouth and minute teeth. These sharks are also quite popular in the aquarium trade as their small size makes them ideal candidates for tank life and the shallow aquarium habitats mirror their ideal environment in the wild.

The body shape and colouring of this species makes them an easily recognised shark. They have a slender almost eel-like body with a tail that is quite long in comparison to its body, hence the family name of long tailed carpet shark. The head has a short rounded snout with nasal barbells on the underside. Their base colouring is a light cream or brown which is marked by dark brown spots and the most identifying feature, the reason for their name, are the two large black spots ringed in white located above each pectoral fin. These spots resemble the epaulettes on military uniforms, hence the name epaulette shark. Once fully grown these sharks can reach just over 1 meter in length and are thought to live for over 20 years.

Epaulette sharks have quite a limited range. They can be found in the waters off the southern coast of New Guinea down to the waters off northern Australia. The Great Barrier Reef is home to substantial populations of these small sharks with some areas having population estimates that number in the thousands. The epaulettes prefer shallow water habitats and can be found in tide pools, tide flats and coral reefs. They are quite shy and will often hide in and under coral during the day.

Like all sharks the epaulette is a carnivorous predator. They have a mostly nocturnal lifestyle and will hunt and feed on a range of different benthic organisms including polychaete worms, crustaceans, molluscs and small fish. To find their prey the sharks will use smell and also the electroreceptors they have on their body, called ampullae of lorenzini, to detect the electrical fields generated by the movements of their prey. Once they have located something to eat the shark will suck the animal into its mouth, this suction is quite powerful and doesn't give the prey a chance to escape.

Walking shark is another name given to this species, the reason for this is that the shark can literally walk in and out of the water, much like a salamander does. They have paddle shaped pelvic and pectoral fins which they can move like legs. This walking is the sharks most commonly used mode of locomotion, especially when hunting. In addition to this walking adaptation the epaulette shark also has the ability to survive for extended periods of time in pools with low oxygen concentrations and even out of the water. The reason they can do this is they have the ability to selectively re-route their blood supply to parts of the body which are absolutely essential, effectively shutting down other organs which conserves oxygen in the blood. This adaptation is particularly beneficial to the sharks as they spend a lot of time in small tide pools low in oxygen and it also enables them to move from pool to pool at low tide by completely leaving the water.

Epaulette sharks are what is known as oviparous, this means that they lay eggs. The fertilisation of these eggs is internal and it is common for up to two eggs to be produced from each breeding event and a female will produce up to 50 eggs a season. Once the eggs have been laid they will become attached to coral or rock where it will remain while the embryo inside develops for about 120 days after which it hatches and a fully formed juvenile shark emerges to start its life on the reef. 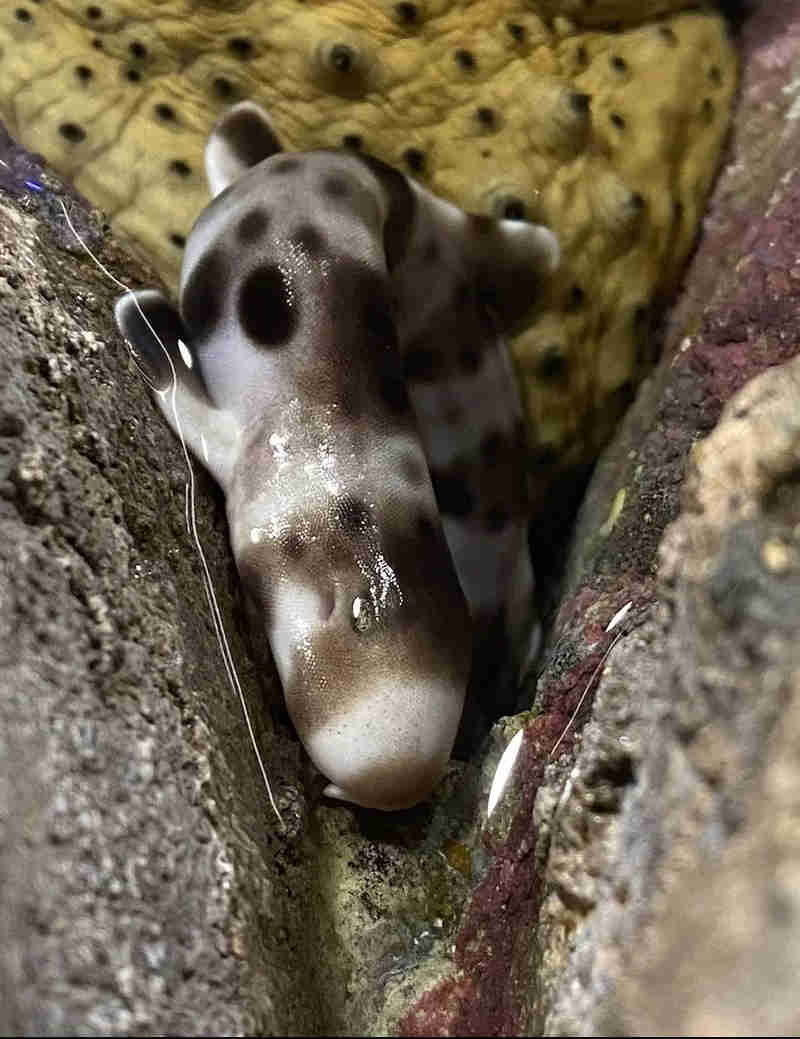 These harmless little sharks can be spotted all around the Whitsundays hiding in the fringing reefs around the islands, you just have to look closely. They are currently listed as a species of least concern by the IUCN however this doesn't mean we don't need to look after them and make sure their populations remain at healthy levels. When you see these guys on snorkels it is important that we don't disturb or touch them no matter how cute and placid they may seem.